This week’s tip is: Don’t let rejection discourage you. Keep persevering and the role you are meant for will come along! 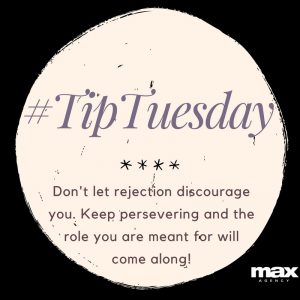 It comes with the territory.

Rejection is inevitable in the acting and modelling industries. Casting Directors sometimes see hundreds of people for the same role so the odds of landing them can be low. However, that does not mean that you should give up acting for good, even if it’s been a few weeks, months or YEARS since you booked a job!

Now some people may get into acting or modelling for the wrong reasons aka fame and fortune. But if you really are passionate about what you’re doing (or trying to do) then why give up so easily?

It doesn’t hurt to try new things to bring back your motivation. Maybe that’s attending a new acting class or moving to a new city to audition! Having different surroundings and different people to interact with could bring back the inspiration for your craft!

Have a Plan B in case

There’s nothing wrong with having a plan B or C or even D. In fact, that would be a smart thing to do. However, you can still find time for acting along with your back up plan. Auditions normally take around 20 minutes and along with commute time, we’re taking an hour or two– tops! Managing an acting life and a real life is perfectly normal for most actors, as many Max Agency talent would tell you.

Some of the most well known names in Hollywood have dealt with so much rejection that they nearly quit acting altogether. In fact, superstar Kristen Stewart is one of them!

According to an interview with ET, Kristen said, “I decided a year after not getting any commercials, ‘F*ck it. I won’t make my mom drive around Los Angeles anymore.'” If she had quit then, she never would have been casted as Bella Swan in the Twilight Saga and had her career launched from there.

Many other famous actors have stories such as this one including: Bradley Cooper, Claire Danes, Robert Pattinson, and Chris Hemsworth.